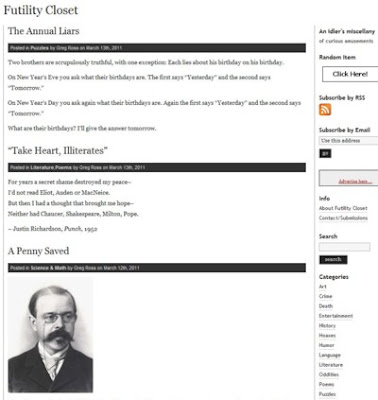 MY REVIEW: This is a fun blog, wiht 3 or 4 updates most days. Each update is a bit of trivia from history, literature, etc. At 99 cents a month, this blog is an informational bargain.

Lake Huron’s Manitoulin Island contains a lake of its own, Lake Manitou. Lake Manitou is the world’s largest lake-on-an-island-in-a-lake.

When the facts change, I change my mind. What do you do, sir?” — John Maynard Keynes

What constitutes a name? In 1976, North Dakota short-order cook Michael Dengler sued for the right to change his name to 1069. He said that each digit reflected an aspect of his identity; 6, for example, symbolized his “relationship with the universe in my understanding of my spatial occupancy through this life.” He insisted that “the only way that this identity can be expressed is 1069.”

The state supreme court wrestled with the implications:

If the proposed change is written or printed it would simply appear in Arabic symbols, 1069; but if it is verbalized would it be ‘one thousand sixty-nine,’ ‘one naught six nine,’ ‘one zero six nine,’ or would it be ‘ten sixty-nine’? Petitioner, during the oral argument, stated how he would verbalize it, but this would not eliminate the problem because other persons will not know this.

Some observers joked that he could go by “Juan.” But in the end the court refused the request altogether. “Innovative ideas, even though bordering on the bizarre, are frequently encouraged and may be protected by the law and the courts, but to use the court or law to impose or force a number in lieu of a name upon society is another matter.”