Netfix Instant Play Picks of the Moment (arts and entertainment) 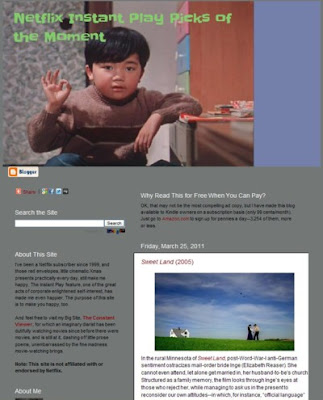 BLOG DESCRIPTION: A weekly guide to the classic, the offbeat, and the overlooked on Netflix Instant Play

MY REVIEW: Netflix is an organization that allows you to watch TV shows and movies on your computer, as well as borrow DVDs via mail, and keep them for as long as you want without an overcharge fee. If you just watch on the internet, it costs $9 or so a month, if you also want the DVD option, it's a few dollars higher.

If you watch a lot of movie and TV, this is the way to go, as they've got classics from the US and Britain, foreign stuff, and new movies. Occasionally it's a pain. I recently wanted to watch This Proud Valley, an English movie from 1939 starring Paul Robeson. I couldn't watch it instantly, I would've had to order the DVD. Fortunately it's up on Youtube (but there, you have to watch it in 10 minute increments.)

This blog reviews only those movies that are avaiable to watch via the Internet. It's a great idea - if you're looking for new experiences, this blog describes movies - on a weekly basis - that might intrigue your attention.

Sweet Land (2005)
In the rural Minnesota of Sweet Land, post-Word-War-I anti-German sentiment ostracizes mail-order bride Inge (Elizabeth Reaser). She cannot even attend, let alone get married in, her husband-to-be's church. Structured as a family memory, the film looks through Inge’s eyes at those who reject her, while managing to ask us in the present to reconsider our own attitudes--in which, for instance, “official language” acquisition becomes more important than the quality of the newcomer's character. And of course the irony is that these are Norwegian farmers--Torviks and Frandsens and Thorwalds--their own voices soft with fading accents, and isolated as only Upper Midwest farmers can be.

But Sweet Land operates only peripherally as social commentary. The film remains a personal story of all-but-despair, resolution, and the blind persistence of love. The performances are affecting--Reaser is a shining light, her fiancé is played by Tim Guinee (who reminds of Nathan Fillion--take note, ladies and others who find him dreamy) with an Old Hollywood boyish charm suitable for suitors, Alan Cummings grins and squints affectingly as the best friend--and John Heard's Reverend is especially compelling: He scowls at Inge's foreignness, denies her any opportunity for respectability--but does so without movie-villain hardness. Instead, he is almost kind, as though he's simply waiting for her to repent for a sin she didn't commit, and be welcomed in her humility.

The fact that she refuses false humility--and chooses instead honest pride--is the film's heart, as beautiful as the sweeping fields and sky the movie is in love with, Nature spread over this (at first) melancholy story and trying Her best to provide moments of sun and shade as needed.