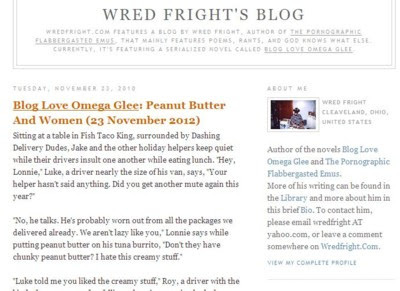 MY REVIEW: I've recently become interested in serial fiction blogs...and truth to tell I don't know if the Kindle is suitable for it. I'd always assumed that the Kindle presented all the archives of a blog...but this is not so, they only display 7 pages worth, or sometimes even less. So you sign up to a serial fiction blog and you may not get the very first chapter of it.

But, you can always go to the web to read the initial chapters, and once caught up, continue to read it on your Kindle.

As for Blog Love Omega Glee...I have a prejudice against stories written in the present tense, so I can't fairly review the author's writing. However, I've shared his latest blog post, so you can get a sense of his writing and of the story itself. If you like it...check it out.

Sitting at a table in Fish Taco King, surrounded by Dashing Delivery Dudes, Jake and the other holiday helpers keep quiet while their drivers insult one another while eating lunch. "Hey, Lonnie," Luke, a driver nearly the size of his van, says, "Your helper hasn't said anything. Did you get another mute again this year?"

"No, he talks. He's probably worn out from all the packages we delivered already. We aren't lazy like you," Lonnie says while putting peanut butter on his tuna burrito, "Don't they have chunky peanut butter? I hate this creamy stuff."

"Luke told me you liked the creamy stuff," Roy, a driver with the kind of tan one gets after falling asleep in a tanning bed whose automatic shutoff is broken, says and laughs, slurping diet pop through his straw.

Lonnie pauses from peanut buttering his burrito and sticks his right index finger in the air like a talisman, "I like my peanut butter chunky and my women creamy."

"Oh, God, here we go again," Siobhan, the only female driver at the table, says.

"I heard it was the reverse," Luke says.

"Jake, has he made any special stops yet?"

"You know, the ones where he takes a half an hour to deliver a package and a woman walks him out and his overalls are mussed and so's the woman's hair," Siobhan explains.

"Half an hour?" Luke says, "I think five minutes for Lonnie would be a world record."

"Hey!" Lonnie says, index finger rising again, "That was just once and I told your wife to slow down."

Luke laughs and gets up with his tray of fast food wrappers, "Speaking of her, it's time I stopped in for my daily quickie."

He beckons to his helper, a sleepyeyed midget, "C'mon, Jason, you can sleep in the van while I'm rocking the house."

Goodbyes are exchanged and Luke and Jason leave, sounding at the door the foghorn which thanks the staff for a good meal. "Well, we better get moving too," Siobhan says, nodding at her helper, a young woman with a squirrel like face minus the fur and whiskers, "I don't want an inspector showing up and hassling me for a long lunch."

"That asshole Allen already showed up this morning and was about to yell at me for leaving the back door unlocked. I had Jake in the back looking for a package though, so he couldn't say anything. That fucking guy. He's fucking unbelievable."

"I tell you what's unbelievable. All the shoppers out today and the traffic. I didn't think it could be worse than last year but somehow it is," Roy says, crunching up his empty soda cup.

"I hear ya. These fucking people . . . " Lonnie says, before launching into a tirade about having to work on the day after Thanksgiving, which includes 57 variations of the word "fuck".

By the end, only he and Jake are left at the table, and then they too must be dudes who dash to deliver.