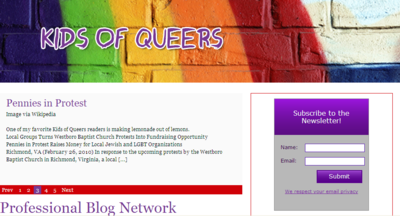 BLOG DESCRIPTION: A blog for adult children of GLBT parents. Discussions on growing up with a queer parent, usually from mixed orientation marriages.

The important thing for them is to know that they are not alone, and so this blog is of importance in that respect.

The blog seems to only be updated once or week or so, and has not been updated since March 20. However, if people actually visit the blog and start making comments, I expect the author will be re-energized and begin writing again. And even if you'd prefer just to receive updates via Kindle, try it for the two-week free trial period, just to see what happens.

Last night I went to an event in Minneapolis. It was a meet and greet kind of thing for Crave Minneapolis, a chance to meet business women. I met some really interesting women there and am so glad I braved the storm and drove for hours (what would usually take 20 minutes) to go to this event.

I handed out my business card to one of the women I was speaking with. She noticed this blog listed on the back of the card and asked if I was a kid of queers. I said that indeed I was. She then went on to say that some of the most interesting people she knew had been raised by gay parents.

She meant two gay parents who were out of the closet living their life openly and honestly.

I explained that I was not that kind of child, that I had been raised by one straight parent and one gay, closeted parent.

The venue was loud so there wasn’t much discussion on the subject after that. We got to talking about the movie Mighty Ducks since her business was named for the character she played in the movie. She named her business Cake Eater Bakery and if you are ever in the Minneapolis/St. Paul area you must find one of their stores and try their sweets. I sampled one of their brownies (they called them something else but I can’t remember the name) and they were to die for. Better than sex brownies.

But I have gotten off track.

Her comment made me think about a couple of things on my long drive home.

As a child raised by a gay parent I don’t fit the mold. It wasn’t something I spoke about to anyone when I was growing up. I didn’t because I didn’t think I was allowed to. No one ever told me not to say anything but somewhere along the way I learned it was something for which I should be ashamed.

Kids today, who are raised by gay parents, have it so differently than kids in my generation or at least circumstance. They don’t worry about what other kids are going to say. Not that other kids won’t say something but since they aren’t hiding anything they don’t have to grow up trying to keep a secret.

I kept my dad’s secret just like he kept his secret when he was growing up. I don’t think he meant to drag me, or the rest of my family, into the closet but I don’t think he thought he had any other options.

None of this is here nor there.

I find it interesting that as it becomes hip to be gay or raised gay {(I mean hip as in accepted more and more) I never use the word hip, I usually use the word cool but I use it too often so I’m trying something else, I’m not that old however that I ever used hip in a hip way}. Anyway, my point, and I really do have one, is that I still don’t really fit the mold.

I know there are a lot of people who read this blog but who never comment. If you are a child of a gay parent, or parents please let me know you are here by saying “hi”. You don’t have to use your real name. I just want to know that there are others out there like me.