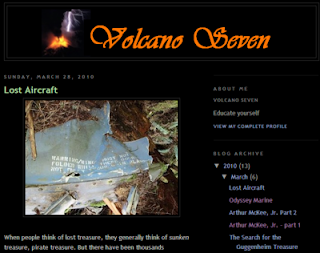 MY REVIEW: It is no accident that the Pirates of the Caribbean movies have been so successful (although I must say the first one was the best, and the other two rather disappointing from my point of view!) - everyone is fascinated by pirates and pirate treasure. Well...probably more by pirate treasure than pirates!

Who doesn't dream of walking on white sands, with an azure sea, and coming across a gold coin or two, washed in from a sunken galleon?

There's plenty of treasure out there - not just gold, silver, and jewelry on board sunken ships, but also cultural treasure, and perhaps most important, knowledge. There are lost ships, lost aircraft, lost people (Judge Crater, for example)...and Volcano Seven documents the search for (and sometimes the finding) of them all.

A couple of years ago, I bought shares in Odyssey Marine, hoping the stock would rise and I would become rich beyond the dreams of avarice. It didn't happen. Actually, I have lost half of my investment! (Not that this was a great tragedy....I only bought 100 shares.)

Now, I'm not really dissing Odyssey Marine. They've got a lot to deal with - they've found a ship in international waters and yet Spain is claiming it, and the treasure it contains to be their's, so there are lawsuits and the lawyers are taking away all the money and leaving none for shareholders.

Still, there story is interesting and here it is.

From their website:
Odyssey is the world leader in deep-ocean shipwreck exploration, searching the globe's vast oceans for sunken ships with intriguing stories, extraordinary treasure and precious artifacts spanning centuries of maritime travel. Our important discoveries also uncover priceless new knowledge and history from the depths. As we recover these shipwreck treasures once believed lost forever, we also resurrect lifetimes long forgotten, offering a rare and fascinating window into historic events that would otherwise remain obscure.

Our passion for shipwrecks and the amazing stories they tell is as deep as the oceans we explore.

No one knows shipwrecks better than our world-class team of researchers, scientists, technicians, and archaeologists. We've surveyed and mapped more than 10,000 square miles of seabed and spent more than 9,000 hours diving on shipwreck sites using advanced robotic technology, while more importantly, applying the highest archaeological standards. Our expert team has discovered hundreds of shipwrecks ranging from 3rd century BC Punic sites to U-boats and Colonial warships.

In 2003, we discovered the Civil War-era shipwreck of the SS Republic® and recovered over 51,000 coins and nearly 14,000 artifacts from the 1,700 foot (518 meters) deep site. In May 2007, we announced the recovery of over 500,000 silver and gold coins, weighing 17 tons, from a Colonial-era deep-ocean site code-named "Black Swan." In 2008, Odyssey discovered what is considered one of the most significant shipwrecks in history, HMS Victory, Admiral Sir John Balchin's flagship which perished in 1744. And our expeditions continue to unveil new sites with fascinating stories and cargoes.