RetroReview Tuesday: The Many Faces of Truth 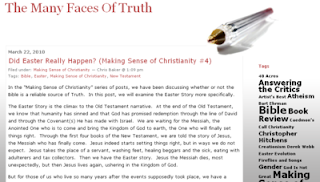 AMAZON SUBSCRIPTION LINK: The Many Faces of Truth

BLOG DESCRIPTION: Exploring Truth in the many people and places that reflect it. Included are essays as well as book, music and movie reviews.

MY REVIEW: This is an excellent blog for anyone who is religious, not religious but interested in the history of religion (that'd be me). The author discusses the Bible, and books about religion, Christian music, and so on, from a Christian standpoint. He writes very well, in a very informed manner.

In the "Making Sense of Christianity" series of posts, we have been discussing whether or not the Bible is a reliable source of Truth. In this post, we will examine the Easter Story more specifically.

The Easter Story is the climax to the Old Testament narrative. At the end of the Old Testament, we know that humanity has sinned and that God has promised redemption through the line of David and through the Covenant(s) He has made with Israel. We are waiting for the Messiah, the Anointed One who is to come and bring the Kingdom of God to earth, the One who will finally set things right. Through the first four books of the New Testament, we are told the story of Jesus, the Messiah who has finally come. Jesus indeed starts setting things right, but in ways we do not expect. Jesus takes the place of a servant, washing feet, healing beggars and the sick, eating with adulterers and tax collectors. Then we have the Easter story. Jesus the Messiah dies, most unexpectedly, but then Jesus lives again, ushering in the Kingdom of God.

What we didn’t look at in that previous post is what the men were doing during the Easter Story. First, just before Jesus is arrested, he takes a few disciples and prays in Gethsemane. Jesus is greatly disturbed and sorrowful, and he asks the men keep watch as he leaves to pray by himself. When he returns, he finds the men in earnest prayer. Wait. That’s not right. Jesus returns to find the men keeping watch, just like Jesus asked. Wait. That’s not right either. Jesus returns to find the men sleeping. Yep. That’s right. Sleeping. This happens not once, but multiple times. Jesus brought some men along to keep watch while he prayed, and instead of doing as Jesus asked, they fall asleep. Over and over again. (Mark 14:32-42)

Then there is Peter. While Jesus is being questioned by various authorities, Peter is asked whether he is a disciple. He denies ever knowing Jesus. Again, this happens not once but multiple times. (Luke 22:54-62) John describes it very poignantly, “It was cold, and the servants and officials stood around a fire they had made to keep warm. Peter also was standing with them, warming himself.” (John 18:18) Instead of standing with Jesus as he is questioned, Peter is standing with the servants and officials of those who are questioning Jesus.

Peter is by no means the only cowardly one, though. We find out from John that the rest of the men have been locked up in rooms hiding because they fear for their lives. Instead of honoring Jesus at his grave, instead of anything else beneficial they could have been doing, they are locked away, hiding. (John 20:19)

If the Easter Story is a lie, if it is simply made-up, why are the men presented as cowards and the women presented as the brave heroes of the story? Wouldn’t the male authors of the Gospels have preferred to write it the other way around if they were simply making it up?