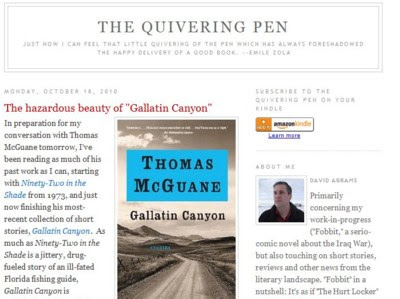 BLOG DESCRIPTION: Primarily concerning my work-in-progress ("Fobbit," a serio-comic novel about the Iraq War), but also touching on short stories, reviews and other news from the literary landscape. "Fobbit" in a nutshell: It's as if "The Hurt Locker" and "The Office" got married and had a kid they named "Catch-22."

MY REVIEW: I liked this blog, but there's no denying it's got an unfortunate title. Indeed, another blog has the same name - but it's a romance writer's blog!

Those who look past the title (it's a quote from Emile Zola) to the actual content of the blog will also enjoy it. The author shares excerpts from his novel (and the sample post below is one of those) as well as book reviews, info on freebies at Amazon, and so on.

The Darkest Hour is Just Before the Dawn of Democracy

When I look back at my year in Baghdad, specifically through the portal of my journal, I'm struck by how different a person I was just five years ago. That David Abrams was wound tight as a clock-spring, swollen with naivete, and hypersensitive to every little thing going on around him. Sometimes, though, he wrote some pretty good shit.

I've taken a lot of what happened in 2005 and transmogrified it into the fiction of Fobbit. But here are a couple of entries which come to you direct from the journal, unedited except for preserving some individuals' identities. The "Referendum," for those of you who aren't CNN junkies, refers to the effort to ratify the Iraqi constitution. It was one of many historic days I saw that year when thousands of citizens went to the polls, braving terrorist threats and trying to put aside years of Hussein-era brainwashing. You can read more about the referendum at this Wikipedia page.


October 13, 2005: I was standing in line today waiting to get my flu shot and I struck up a conversation with a master sergeant who works in the Civil Affairs section. He was telling me about a sergeant first class in his unit who had just been killed two weeks ago. “Just a week before it happened, he was hit with an IED and injured his hand. Walked away with nothing but a minor hand injury. And just imagine all that he and his wife went through with that, all the trauma associated with getting hurt over here far away from your loved ones and there’s nothing either one of you can do about it. Then, just a week later, he’s dead. It sucked, man. think of his wife getting both of those messages delivered to her in the space of less than two weeks. It just really sucks, man.”

Lieutenant Colonel W______ came up to me, a bundle of red-inked press releases in his hand. He was shaking his head. He’d just come from the chief of staff’s office. I could tell because he had that “I’ve just been kicked and I’m still numb and tingling with pain” look about him.

“The chief’s latest twist is that he doesn’t want us to put times in our press releases.”

I rolled my eyes, clapped a hand to my forehead.

“I know, I know, but I can kind of understand how it’s a security issue. He feels like we’re giving too much away to the enemy by specifically identifying when events occur. It’s a TTP issue.”

Pretty soon, there’s not going to be much left of our press releases for him to chop away at. I foresee the sanitation of PRs due to Tactics, Techniques and Procedures dumbing us down to the barest element: “A military unit an IED somewhere in Baghdad did something sometime during the month of October.” And that’s it, that’s the whole press release. Anything more would compromise our security and put our soldiers in jeopardy.

This follows on the heels of the Iraqi government’s paranoid prohibition of allowing any Iraqi Army or Iraqi Police to talk to the media until after the Referendum. A complete news blackout for the next week. This is going to make it tough for us since Corps PAO is pushing us to “put an Iraqi face” on all releases, whenever possible (which, in turn, reverses the previous command of not writing about the IAs or IPs because that was now the job of the Ministry of Interior or the Ministry of Defense [which, of course, is a reversal of the way it was when I first arrived in Baghdad and I was told to play up Iraqi Security Forces successes at every turn]). So, no more credibility-lending quotes from Iraqi military or police in our PRs. And, whatever you do, don’t allow Iraqi Soldiers to talk to anyone in the media.

“Try telling that to Gen. Jalil (one of the IA Division commanders) who’s setting up a media center right now,” snarled Maj. P_______.

The task force commander has decreed that “Every time a platoon-sized element or larger rolls out the gate, it’s to be a named operation."

Pretty soon, we’ll have “Operation Go To the Bathroom” or “Operation I Just Need to Gas Up the Humvee.”


October 14, 2005: We’ve been out of paper towels in the men’s room for the past three days. Rumor has it there’s a nationwide paper shortage because they need all the paper for the ballots in the Referendum tomorrow. I don’t know if it’s true, but it’s a nice little urban legend that helps us get over our irritation at not being able to dry our hands.

The chow hall has also run out of ranch dressing and ketchup due to the fact that Iraq has been sealed up—no air traffic, no border crossing, no nothing until after Referendum Day.


October 15, 2005: Referendum Day dawned with something Baghdad hadn’t heard in more than a year: the sound of silence. No fireballs, no plumes of smoke, no rat-a-tat-tat-tat of machine guns rattling through neighborhoods. Just the thump of our heartbeats in our ears. This was the day, this was the moment, this was the hour of decision.

I started off the day on the wrong foot. I came back from taking a shower to realize that I’d locked myself out of the room. Damn. I had to traipse all the way over to the KBR Billeting Office in my shorts and T-shirt to get the spare key.

Before going in to work an hour early, I made sure I had a big breakfast at the chow hall because who knew when I’d have the next chance to eat. Eggs, sausage, hash browns, a pear, a pastry. It all filled my belly and got my blood pumping.

CNN’s Christiane Amanpour was there on the overhead TVs in the chow hall telling us that Baghdad had just woken up from an overnight power outage when, she said, insurgents sabotaged a power plant on the eve of the Referendum. I knew for a fact that it wasn’t true because our Command Information Center had called me the night before to say that one of the electrical plants had experienced a technical malfunction but that it wasn’t AIF-related. The Anti-Iraqi Forces had other bombs to plot and plant, apparently. Still, I let Christiane and the rest of the news media believe what they wanted. It made for much more dramatic TV to say that a power station had been blown up by infidels, rather than a bad fuse just blew, coincidentally on the night before the nation’s biggest day of the year.

I get to work around 6:55. Two minutes later, they make an announcement over the speakers: “Marne X-Ray, this is Marne Zulu.”

“Marne Zulu, this is Marne X-Ray. Go ahead, over.”

“Uh, roger. Just wanted to let you know that the President is voting now.”

I look up at the live television coverage and, sure enough, there are the President and the Prime Minister walking into a bare, non-descript room somewhere in the Green Zone. They get their ballots from a girl in a head scarf, then they walk over to two podiums which have been set up on a stage at the front of the room. They vote—a simple checkmark for “Yes” or for “No”—then carefully dip their forefinger into a bottle of ink which will stain them for the next 72 hours as proof that they voted (a low-tech way to prevent ballot-box stuffing). They hold up their fingers for the camera and smile.

CNN tells me, “The Ministry of Interior says that security is much heavier now than it was in January.”

I sit down at my computer and…it begins. Within an hour, I start to get the first photos from our brigade journalists. I immediately throw them onto the press release template, format it, proofread and copyedit the text, then send it to the printer and rush it in to LTC W______, who then rushes it in to Colonel G______, who then rushes it back to us and then I send it out to my media e-mail list. From conception to release, most of them take less than an hour. Meanwhile, I continue to get more and more releases and photos from our brigades. Soon, I have to have one of the junior-ranking soldiers from the Media Operations Center come over to be my runner. My butt doesn’t even leave the chair—except maybe twice for a quick jog down the hall to take a choked-short whiz before sprinting back to the keyboard. The whole thing works like clockwork and within 12 hours, I have processed 21 releases and sent 45 photos out to the world (a lieutenant later tells me he saw several of our photos appear on CNN throughout the day). At times, I’ve got three different releases open and my brain is doing its typical split-screen function as I try to keep everything neatly compartmentalized and organized in my head. I barely look up from my screen the whole day, except to bark at my runner, “Grab that off the printer and run it in to LTC W______. Now!” I have no time for courtesy. I am a friggin' press release machine. My arms are levers, my heart is a pulley.

That evening, after the polls have finally closed and the releases have dwindled to a trickle in my inbox, Captain L_____ looks at me and says, “Go sit down and eat dinner before you have an aneurysm.”

I don’t leave the office until nearly 11 p.m. But I walk back to my hooch bursting with excitement and pride over the job I’ve done today. For the first time in the 10 months I've been over here, everything went exactly as planned. It was perfect from start to finish. I can still hardly believe it.*


*I had good reason for my disbelief. As anyone** who has paid attention to the news from Iraq since that day knows, the country is still struggling to stabilize its government. The eel is still greased and elusive.