The first five novels of John Carter of Mars 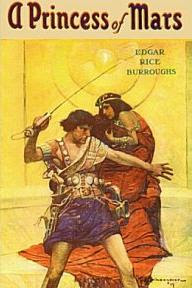 There are eleven novels in the "Barsoom series" as the John Carter of Mars series is known (Mars is Barsoom in the Martian's language). The books were written by Edgar Rice Burroughs, most famous as the creator of Tarzan. He also created the Pellucidar series (Journey to the Center of the Earth, and so on).

There are plenty of 99 cent versions of the first five novels on offer in the Kindle store, and I decided on one titled John Carter of Mars that had an illustration of a green martian as the cover.

I suppose, because these books are so well-known, at least to a certain segment of the populace, the entity offering these books for sale didn't feel the need to give very much description of them, which is a pity. Only the titles of the five books were listed (and the fact that a glossary of people, places and things is included, but not mentioned, I find puzzling. You're competing with five other rivals - and yes your cover is the best )for all that it doesn't appear when you look at it on the Kindle!) but any other things to differentiate yourself from your competitors would be helpful.

The table of contents is not "hot", so I'll have to read through each book chronologically.