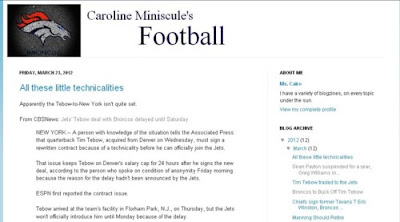 BLOG DESCRIPTION: I've been a football fan almost as long as I've been a baseball fan. Started out with the Minnesota Vikings during the 80s and 90s. Then moved to Virginia so adopted the Washington Redskins. Now I'm in Wyoming and so the Denver Broncos are my team.

In this blog I cover all football, but with an emphasis on those three teams.

MY REVIEW: Football season doesn't start for a few more months, but of course there's plenty going on with trades, free agencies and so on. If you're a fan of the Vikings, Redskins and Broncos, check out this blog.

Broncos to Buck Off Tim Tebow
Peyton Manning is holding a press conference even as I type. He has decided to play for the Denver Broncos.

Tim Tebow is out of a job. But rather than keeping him - just in case Manning gets injured or is unable to play, they are apparently going to trade him as fast as possible.

And I'm a bit bummed about that.

Yes, I know professional sports are a business...but there's also some emotional attachment there. Just as I couldn't root for my Vikings after they signed the Packer, Brett Favre (the Packer in Purple, I called him), so I don't know if I'll be able to root for the Broncos. Oh, I'll still watch and report on them... but I dunno...this has left a sour taste in my mouth.

You do wonder how the quarterbacks of the teams that were panting after Manning feel now. I'm sure they all think that they are as good as he is (though they probably won't say so...)

A few years ago, when Jay Cutler pitched a fit and demanded to be traded from the Broncos - after they had tried to get Matt Cassell - I was on the Broncos side. I thought Cutler had behaved childishly. "It's just a business and he should know that," I thought.

Well..it's 3 years later and I've changed my opinion. Cutler was treated badly by the Broncos and so is Tim Tebow (and so would have been any quarterback who lost their job to Manning).

I'm not too impressed with Manning over this. I admit I didn't follow his saga, but if my impression is correct, he's the one who called around to six teams and said, "Hey, what will you give me if I play for you?" thereby attempting to steal the job of an already entrenched quarterback.

Well, we'll see how it plays out.

I don't want anything bad to happen to Manning - I want him to enjoy a long and full life with full use of all his limbs - but it would be funny if he got hurt the first game of the season and had to retire, and the Broncos had to go scrambling for another quarterback and ended up with a 0-16 record.

If that happens...I wonder if Manning would return the money they will be paying him for not playing. (OF course, you never know if a player would do that, but is prevented from doing so by the Union...)