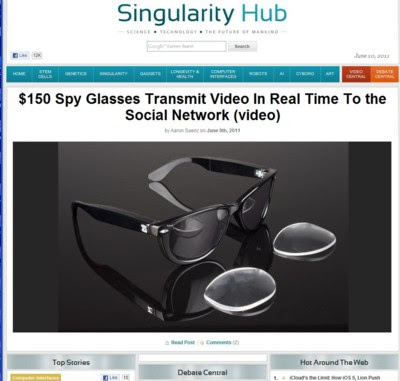 MY REVIEW: If you're interested in robotics and artificial intelligence, this is the blog for you. The future is coming towards us faster than you could possibly imagine - keep up with it by reading this excellent blog. Posts are well written and informative.

Julian Assange: The Facebook Has You
With the increase and further development of communication technologies, everyone is concerned with the impact it will have on the individual’s privacy. Social networking and other internet services like geo-location, which we have covered before, have caused many personal boundaries to seep and bleed into each other, as well as force most of the developed world’s populace to reconsider their notions of personal privacy. In fact, some social networking users do not seem at all concerned about their privacy, viewing themselves as honest people with nothing to hide. Not so, says Julian Assange, founder of the controversial WikiLeaks portal. In a recent interview to RussiaToday, an English language resource devoted to illuminating events in Russia to the broader international community, Assange claimed Facebook, the prominent social network, to be “the most appalling spying machine ever invented.”

Among other things in the interview to RT, such as accusing the media of fueling every war for the past fifty years, Assange implicated Facebook and, more importantly, its users in doing free work for the various US intelligence agencies. He claims that the wealth of information stored on Facebook servers such as people’s conversations, photographs, videos, and contact information is freely available to be perused by government agencies at their convenience, and, given recent cases of social network monitoring, it is hard to accuse Assange of slander.

Perhaps, someone reading these words is thinking something along the lines of “Look who is talking!” Yes, indeed, Julian Assange gained his fame (or, rather, infamy) by blowing the whistle on many secret government communiqués, many pertaining to the Afghanistan and Iraq campaigns, earning him a rather unwelcome reputation in government-affiliated circles. However, in a way, the situation with Assange is only the posing of the age-old question: which is more important, the government or the individual’s right to information? Assange obviously sides with the latter.

His concerns about personal privacy are not without due cause, especially if one takes the time to consider the recent scandals around Apple and Pandora Radio, where their respective iPhone and Android applications were implicated in collecting personal user data and transmitting it to third parties. In fact, even the search engine giant Google was involved in a scandal about WiFi data collected for its StreetView service sometime last year, and as it is now penetrating inside various places of business, those to whom privacy is important should be extremely wary.

Fair warning!
Before someone starts yelling about a global conspiracy, however, two extremely important things have to be realized. First, the various services that have so many running around scared about Big Brother watching them were not invented for the purpose of spying, but rather for personal convenience. For example, another one of Google’s services, Art Project, is designed to let a person experience certain art exhibits, before (or without) actually visiting the museums, not to track down unsuspecting art connoisseurs. Facebook really was conceived as a way for students to connect and share information, not to be a central database of everyone’s psychological profiles and contact information. However, can these services be used in an invasive way? Absolutely, which ties in to the second important point: the vast majority of information out there on any given individual was put up by that very individual. Nobody put a gun to anyone’s head, forcing them to fill out their Facebook profile to completion, including phone numbers and home and work addresses, or update their status with their exact location every ten minutes.

Increasingly accurate and precise tracking methods are a completely natural, albeit unpleasant, side-effect of more effective communications and internet services. Alfred Nobel invented dynamite to clear landslides and avalanches, which did not stop those of a less scrupulous nature to use it in, say, bank robberies. People have to realize that they are also responsible for protecting their personal data, and while there is very little that can be done by the end user in cases like Pandora, where the data was collected surreptitiously, it is very possible to refrain from geo-tagging one’s every photo or posting the addresses of the all the houses a person has lived in for the past ten years if privacy is such a pressing concern for him or her.

On a larger scale, people need to get involved politically to protect their digital privacy. It may be a shocking concept for the 21st century homo sapiens that he or she can actually influence the government, especially one that positions itself as a democracy (who would have thought?), but those who do not want their country’s intelligence agencies’ staff to browse their Facebook profiles as part of their job, need to get up and start pushing their ideas into the ears of lawmakers. A proper digital privacy law may, for example, prevent companies such as Apple and Pandora from future fiascoes with user data because they will know that there will be real consequences in terms of large fines or prison sentences. Of course, sometimes the data garnered from someone’s Facebook account may be used to prevent a crime, but that only means that this hypothetical law needs to be carefully constructed to allow for full protection of the individual’s digital privacy barring probable cause. It is not a novel concept: after all, invasion of one’s physical home by law enforcement agents is illegal without properly substantiated probable cause. Why is this different?

Today’s world is radically different from the one twenty or even ten years ago. The internet is no longer something that only exists on the computer screen. It is not even some parallel digital world anymore. It is penetrating and interconnecting with the physical world on a regular basis, so that the information floating around the net can have very real and tangible consequences in the world outside one’s window. Those who choose to live in such a world have to be constantly vigilant of what sort of digital tracks they are leaving for possibly unwanted eyes, just like one has to be careful not to walk around a dangerous neighborhood in the middle of the night. However, the simple fact that there are dangerous neighborhoods and that it is dark at midnight is no reason to stop going outside for good.

RECENT POSTS:
--Watch Willow Garage's PR2 Robot Solve a Rubik's Cube
--A $25 Computer the size of your thumb
--The myth of the three laws of robotics
--Humanity+: Uniting Transhumanists Worldwide
--Build your own tweenbot
--Will you be a Cyborg by 2027?