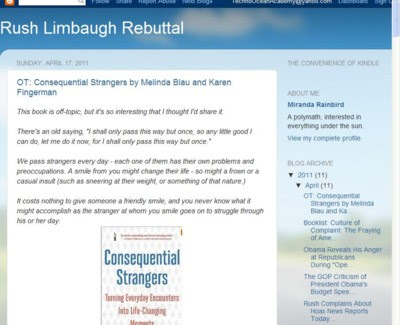 Since Rush Limbaugh is the most popular political talk show host, and since he's famous for presenting only one side - his side - I will share quotes from his radio program each day, and expand on them to reveal the real truth behind what he attempts to convey in his radio program.

MY REVIEW: Rush Limbaugh is one of the polarizing figures in America. This blog tells "the rest of the story" as Paul Harvey used to say. Limbaugh gives his version of events of the day, this blog chooses one of those events and gives that rest of the story.

If you're interested in Rush Limbaugh or the Conservative movement, you will find this blog of interest.