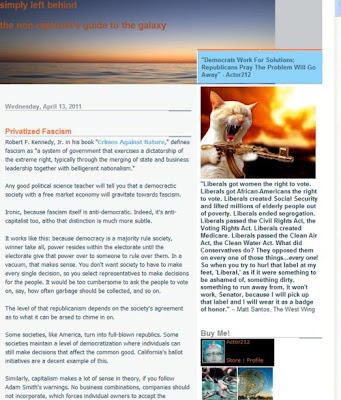 "Liberals got women the right to vote. Liberals got African-Americans the right to vote. Liberals created Social Security and lifted millions of elderly people out of poverty. Liberals ended segregation. Liberals passed the Civil Rights Act, the Voting Rights Act. Liberals created Medicare. Liberals passed the Clean Air Act, the Clean Water Act. What did Conservatives do? They opposed them on every one of those things...every one! So when you try to hurl that label at my feet, 'Liberal,' as if it were something to be ashamed of, something dirty, something to run away from, it won't work, Senator, because I will pick up that label and I will wear it as a badge of honor." -- Matt Santos, The West Wing

From that, you get the idea of what this blog is about. You'll find these articles very interesting. Subscribe!

Is Wisconsin 'broke'? Answer is in the eye of the beholder, experts say
In his inaugural budget address, Gov. Scott Walker stood before a joint session of the Legislature and delivered the somber news: We're broke.

RECENT POSTS:
--Privatized Fascism
--Yeeeeeeeeeeeeeea! Not Happening
--Two-Fer
--I'll Take Twelve
--This May Be Worth A Closer Look
--The Reason The Debt Ceiling Debate Is Political No...
--The End Of The Birthers
--Fighting Fat?
--I May Need To Take Some Pot-Graduate Courses. I me...
--We Should Go Back And Finish The Job
--Cowards Of The Country
--If You're A Conservative Budgeteer....
--High Art
--Wisconsin Is Broke! Broke, I Say!
--The Other Uncle
--Coming To A Theater Near You
--War's A-Coming
--Romneycare Is On The March
--Boener Must Read My Blog
--*Rubbing Hands With Glee*
--The Zen Way To Publishing Success
--An Illustrative Example
--At What Price?
--I Wish Matt Taibbi Would Be A Little Less Shy