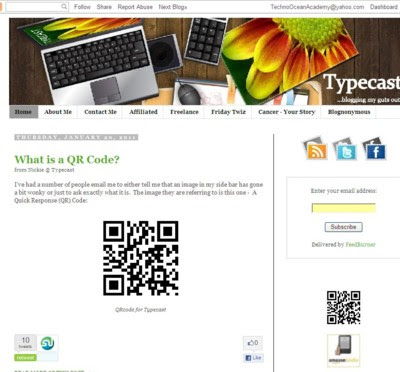 BLOG DESCRIPTION: Typecast is not your average parenting blog. In fact, the title is somewhat of an oxymoron. The author, Nickie, is a young grandparent with a a myriad of life experience and is trying to break the mould of typical parenting. With a grip on social networking and a honest approach to everything, each update on the Typecast blog will leave you wondering how Nickie manages to cram it all in.

Nickie OHara is wife to one, Mum to three and Nana to two. She is trundling through life, coping with whatever is thrown at her. She works full time, is studying for a degree with the Open University and tap dances in her spare time.

Too Accommodating?
from Nickie @ Typecast
Earlier today I had agreed that a friend of the youngest of my brood could have tea and stay the night. They had been to Halfords earlier in the afternoon, eyeing up some mag wheels for BMX bikes (aside: I love how his priorities have changed since going to high school. A few months ago he was happy with an hour on the park and an ice cream from the corner shop), called in at his friend's house to pick up a change of clothes and a toothbrush but rang me to say that they would be a little later than expected. I asked why. He explained that his friend was having his tea before coming to our house. So I asked if Jake was being invited to eat too as we were ordering take-out a little later but he said that he wasn't. He simply hadn't been asked if he wanted anything to eat. Am I alone in thinking that is unusual?

When I was younger, being invited to a friend's house for tea was a rare occurrence and considered a treat. You planned for what seemed like ages, talked about it excitedly and usually went home after school with said friend rather than setting off on your usual route home. A sleep-over was even rarer, almost non-existent.

There has always been a constant stream of stray and random children through our house. I've enjoyed having the children's friends over at our house, more so that I knew where they were and there was no excuse for wandering the streets aimlessly. I wasn't an Enid Blyton mum - there was no freshly squeezed lemonade made by Cook - but the contents of the biscuit tin usually took a bit of a beating. We had little tea parties for friends after school occasionally and birthday parties were always fairly traditional; at home, party food, games and a cake. I have no shame in admitting that it was because we could never have afforded soft play parties or magicians. A minimum of £100 before birthday presents? Plus, we were different by having these parties at home.

Recently habits seem to have changed. I know my children are a bit older now (the two at home are 17 and 11) but at weekends it appears to be the norm to be asked if so-and-so can stop for tea or if Mate X can stay overnight. I know I have probably made a rod for my own back by saying "Yes" most of the time but it seems to be happening almost every weekend now. They don't want to be out hanging around on the local park in the dark or getting drunk on the bowling green- for that I should be grateful, I suppose. Maybe I am the unusual one for being so accommodating?

RECENT POSTS:
--What is a QR Code?
--Parenting 101? Not in this house.
--To Have And To Hold, Until Death Do Us Part.
--Cybermummy Sponsorship Required
--Looking Back Over My Shoulder