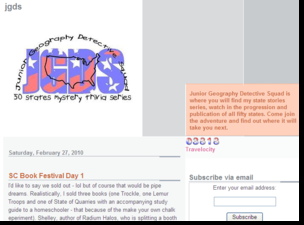 BLOG DESCRIPTION: This is where information about the JGDS series will be posted. The books are about each of the fifty states, one state per book, and are written like a handheld game that gives the kids clues all leading up to the state. It is a cross between Trivial Pursuit and Jeopardy, and if you watch Jeopardy, some of the categories of late have been about the states as well as final Jeopardy answers have been geared toward one state

MY REVIEW: Given the sorry state of kid's knowledge of geography today (well, their knowledge of any topic today), a books series like this sounds like a lot of fun and hopefully will be successful.

The blog itself doesn't talk about the writing of the books, but rather of their marketing. There are also talks with the authors of other children's books.

It's a fun blog, and I would think that the parents of young kids, and prospective authors, would enjoy it. Give it a try.

[As an aside, here's the actual website for the book series (as opposed to the blog): http://junior-geography-detective-squad.weebly.com/index.html. Should the author of these fun books visit this review, please, jazz up that website! At least put some clip art -of kids running around, perhaps - on it! That will catch people's eyes much more successfully than what's there now. [Also, this is a review of the blog, not of the books, so I won't comment on the stereotypical female characters, either! Except for a Grr.]

Here's a few sample paragraphs from a blog entry:

Wow. I just looked at my previous updates for newsletters and have not done any since the first part of August 2009. Updates are definitely needed.

I found a cool site that lists homeschool conferences for Canada, Guam, and every state in the United States. I found four more in the four states closest to me, within a five-hour driving distance of me, in addition to the Love 2 Learn one in Charlotte. I will be an exhibitor at four, maybe a fifth (still awaiting updates as to when it actually will take place, where and an exhibitor application) this summer with a presenting workshop at each one ("Writing Roads" a combination of writing and geography games for the kids). See my Blog Tour page on the sidebar for the listed events.

If anyone is interested in finding homeschool conferences in their area to either attend or exhibit at, here is the link for you to check out. Eventually, I'd like to attend conferences in every state but until I have some funding (either a sponsor or the books are supporting me), then traveling to more than a few states on the east coast is going to have to wait a while. I think these will be a good thing this year. Will definitely keep you posted how things go this summer.

JGDS SERIES NEWS: State of Reservations is slated to be released February or March 2010; since Aidana has had the flu and her son has the piggy flu, I hope by the end of March this will be released. State of Altitude is slated to be released in April or May of this year; again, hopefully by the 1st week of June so I can have four titles to carry with me to the homeschool conferences. And we have a title for #5 - State of Secession which is about halfway completed (struggling to get it done due to work situations that have taken over me but I do promise to have it done soon). It is slated to be released August (if I remember correctly), which would be nice to have that book available for the conference in August. Book #6 is titled State of Nature and my son has picked the items to be on the cover which will be pretty cool looking (I think and if Aidana and Vivian agree). Book #7 is pending approval for a title, so will wait to let you all know what the title will be with that.

In December I wrote to the Jeopardy!(R) folks asking them to sponsor my series. So far I haven't heard anything back yet, so I can only hope that the old adage "No news is good news" is true for this. As soon as I know something on this end, I will update my fans and readers.

RECENT ARTICLES:
-SC Book Festival Day 1
-Book festival bound
-JGDS Newsletter - Feb 2010
-Vote today
-Want to find out how reading can be fun and educational at the same time?
-Free book anyone? Your school could really use this book
-Book trailer video on Books in Sync contest