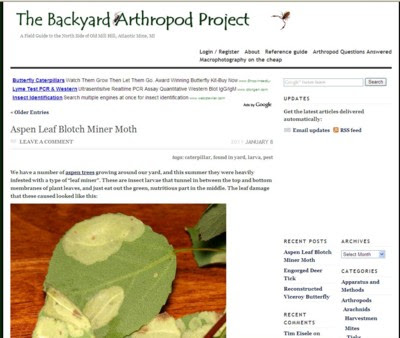 BLOG DESCRIPTION: This site was created initially to identify the arthropods (bugs!) living in and around the author's house in upper Michigan. In addition, the following points are made:

(1) Even in areas with “low diversity”, like the northern half of North America or the inside of the average house, there are more kinds of little crawly things than you might imagine.
(2) Just because an arthropod isn’t big and showy doesn’t mean that it doesn’t deserve attention too.
(3) It is possible to find interesting things wherever you happen to be if you look at sufficiently high magnification.

MY REVIEW: As you walk around your home - lawn with grass, gardens, trees - or your neighboring surroundings - chances are that you're walking past bugs of alll kinds. You perhaps ignore them - the owner of this blog positively revels in them!

Do the leaves of your plants look funny? They might be infested by some microscopic creature. See a strange growth on a tree? It might be the remains of a certain kind of Wasp nest.

If you have curiousity about your surroundings, this blog is definitely for you. The author writes knowledgeably and well, and takes macro-photographs that reveal every tiny detail of these tiny creatures.

Aspen Leaf Blotch Miner Moth
2011 January 8
We have a number of aspen trees growing around our yard, and this summer they were heavily infested with a type of “leaf miner”. These are insect larvae that tunnel in between the top and bottom membranes of plant leaves, and just eat out the green, nutritious part in the middle. The leaf damage that these caused looked like this:
[Photo not included]
The discolored blotches that they made were most visible from the bottom of the leaves. These were picked on July 24, which was just about the time the caterpillars inside were mature.
[Photos of the caterillars not included]
The caterpillars were pretty minute, only maybe 4 mm long.
Some of them had, in fact, started to pupate already, making these elongated black pupae.
Sometime in the next month, some tiny moths had emerged from the pupae. We unfortunately didn’t notice they had emerged while they were alive, so we had to make do with photographing a dead one.

One normally identifies leaf miners based on the kind of plant they were on, and the kind of damage they do. Since these were making blotchy damage to the underside of aspen leaves, that makes them most likely the Aspen Leaf Blotch Miner Moth[1], Phyllonorycter apparella. While they cause a lot of visible damage, they evidently usually aren’t that much of a threat to the tree because they don’t destroy the whole leaf, just parts of it. Although, in sufficient numbers, they can pretty much defoliate a tree. Of course, trees generally have enough resources to survive being defoliated once in a while, so it takes a large infestation several years running to actually kill the trees. And, since these moths have no real defense against predators other than being tiny, their eruptions in numbers tend to get eaten up fairly quickly.

An interesting thing about the hindwings, is that they don’t look like the hindwings in larger insects. Instead of being a thin membrane, the hindwing looks more like a feather – a solid midrib, with fringes on both sides.

This type of wing is seen on a number of other very small insects, like the unrelated Thrips. They can get away with these very simple wings because, as you get smaller, the fluid dynamics of air become very different from the way fluid flows at larger scales. Flying through the air when you are about the size of a piece of lint is very different from doing the same thing when you are the size of, say, a bird – at small scales you are dominated by the viscosity of the air, and your weight and the effects of turbulence are much reduced. So rather than having wings that air flows over to create lift, at small scales one is better off with something more like paddles that can be used to row through the air by brute force.

—————-
[1] A trick to use when you are called on to identify an insect and you have only a vague idea what it is: look it over for a bit to see if any traits strike you, string together a bunch of applicable adjectives, stick them onto a broad class of insect, and voila! A common name is generated! And, it has pretty good odds of being the same common name that other people have generated. Like with this one – presented with an aspen leaf, and caterpillars making blotchy mines in the leaf, and that turned out to be a moth, I could generate “Aspen leaf blotch miner moth” off the top of my head. Which then turned out to be the exact common name that BugGuide had them filed under.