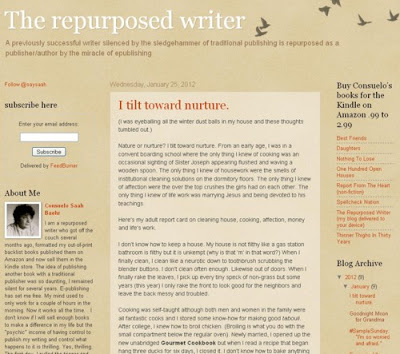 BLOG DESCRIPTION: I am a repurposed writer who got off the couch several months ago, formatted my out-of-print backlist books published them on Amazon and now sell them in the Kindle store. The idea of publishing another book with a traditional publisher was soul crushing and I remained silent for several years. E-publishing has set me free. My mind used to only work for a couple of hours in the morning. Now it works all the time. I don't know if I will sell enough books to make a difference in my life but the psychic income of having control to publish my writing and control what happens to it is thrilling. Yes, thrilling. The first day, I pulled the trigger and uploaded my historical epic novel, Daughters, onto the publishing platform on Amazon, I was beyond happy. As Truman Capote said when he sold two short stories in one day: Dizzy with happiness is no mere phrase. It used to be that I would clean the oven to avoid writing. Now I write avidly because I know I can publish what I write. I have satisfied my two passions - writing and commerce. I'd love to share the ride with you and also everything else that I think about.

MY REVIEW: I enjoyed this blog from a fellow writer. It's a blog of interest to everyone - writers, women..men...anyone who has an interest in what goes on in a daily basis within ourselves.

Her book titles are interesting. I particularly liked Thinner Thighs in Thirty Years!

"I'm with the rescue boats."
Hop scotching over the news:

In the phrasing is everything department:
“Get back on board!” De Falco (Coast Guard) to the Captain of the Costa Concordia.
“I’m with the rescue boats.” Captain Francesco Schettino.

In the equal opportunity department:
People are all upset about the image of President Obama on the cover of Newsweek.
“ He looks terrible, and surprisingly like Jimmy Carter, even down to the downturned liverish lips and incipient jowls.”
Let’s not forget Michele Bachman’s cover where Newsweek gave her those googly unfocused eyes. It all evens out.

In the giggling over excess department:
Poor Paula Dean. Yes, she sort of withheld the truth. Is that lying? (I think lying has its place.) Yes, she is now being compensated by a drug company that provides relief for diabetics. Yes, she doesn’t make sense when she begins to defend the timing of her revelation. Maybe all that maniacal giggling over her excess that goes on in the cooking show is not put on. Okay here’s our problem. We thought Paula was lovable, like our ditzy Auntie Josephine. Now we find out she is an avaricious uncontrollable giggler who is slavishly devoted to money. What’s wrong with that?

Apropos of nothing remember when Christopher Hitchens called Mother Teresa an avaricious gnome? How can you not miss that guy?

Too much admiration can ruin you department:
Tom Hanks’ dog, Monty, died. That was a headline. I’m not one to feel that because our brave young soldiers are dying in foreign lands we can’t say anything fun but come on. Here’s my problem with Tom Hanks. People loved him too much and then he thought he was too special and could be good at everything. Who wouldn’t? I think his “jump the shark” moment came right after Forrest Gump. Then he began acting all “awh shucks” that was really hiding, “I’m so freaking special but I don’t want to look as if I agree.” Whenever anything good happens to me I start acting up, too, so I’m no better than Tom Hanks except no one is shoving a microphone in my face.

An irrelevant revelation department:
Newt Gingrich’s ex revealed that Newt wanted “an open marriage.” If you were named Newt and looked like a kewpie doll and some good-looking woman wanted to have an affair with you, wouldn’t you want an open marriage? Remember when Jimmy Carter admitted to having “lust in his heart.” In the Catholic Church there’s no difference between lust in your heart and lust in the bed. Thought or deed, a sin is a sin. I would give Newt a pass on this one especially since the ex who is blabbing was the “affair” when Newt was married to another.

Okay, that’s the news in a nutshell except for the irresistible clip of our President looking up at Al Green and singing a phrase from “Let’s Stay Together” at the Apollo.

RECENT POSTS:
--I tilt toward nurture.
--Goodnight Moon for Grandma
--#SampleSunday: "I'm so worried and afraid."
--E-warning! I'm going to ramble. (Redux)
--"I'm with the rescue boats."
--Have this blog delivered to your device. Whaaaat?...
--Letting Spills Harden on the Stove
--“Oh wow, oh wow, oh wow” Steve Jobs
--The power of soup and the power of sound.