Letters of Note (arts and entertainment) 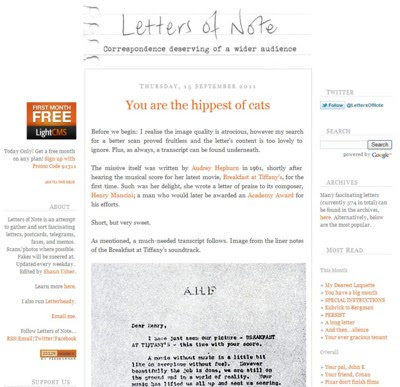 BLOG DESCRIPTION: Letters of Note is an attempt to gather and sort fascinating letters, postcards, telegrams, faxes, and memos. Scans/photos where possible. Fakes will be sneered at. Updated every weekday. Edited by Shaun Usher.

MY REVIEW: This is an excellent blog if you're interested in a glimpse of the private lives of actors, directors, politicians or other people of note. Today's post provided a jpg of a letter Audrey Hepburn had sent to Henry Mancini, praising him for his work on the soundtrack for Breakfast at Tiffany's. 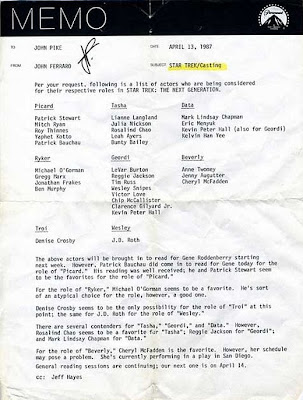 Star Trek castingIt could have been so different. From the archives of Paramount we have a memo - written in April of 1987 to the studio's Head of Network TV - detailing the acting talent then being considered for various roles in Star Trek: The Next Generation; a programme that would begin to grace the small screen just five months later. A few observations: at this juncture, Patrick Stewart was already a favourite for Picard, alongside Patrick Bauchau; Brent Spiner wasn't even being considered for the role he eventually took, as Data; a young man by the name of Wesley Snipes was in the running for the part of Geordi, a role ultimately filled by LeVar Burton but seemingly close to being taken by Reggie Jackson; Jenny Agutter at least read for the part of Beverly, and there was, as of yet, no sign of a certain Wil Wheaton, the youngster who eventually played her son, Wesley Crusher.

Per your request, following is a list of actors who are being considered for their respective roles in STAR TREK: THE NEXT GENERATION.

For the role of "Ryker," Michael O'Gorman seems to be a favorite. He's sort of an atypical choice for the role, however, a good one.

There are several contenders for "Tasha," "Geordi," and "Data." However, Rosalind Chao seems to be a favorite for "Tasha"; Reggie Jackson for "Geordi"; and Mark Lindsay Chapman for "Data."

For the role of "Beverly," Cheryl McFadden is the favorite. However, her schedule may pose a problem. She's currently performing in a play in San Diego.

General reading sessions are continuing; our next one is on April 14.