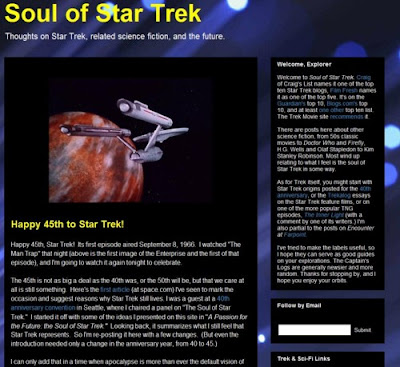 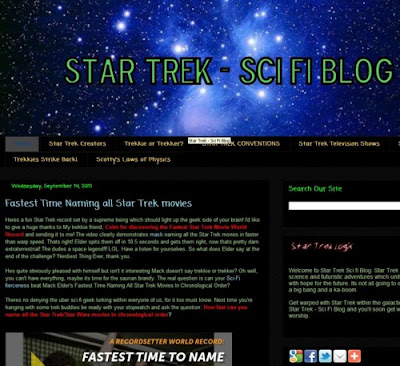 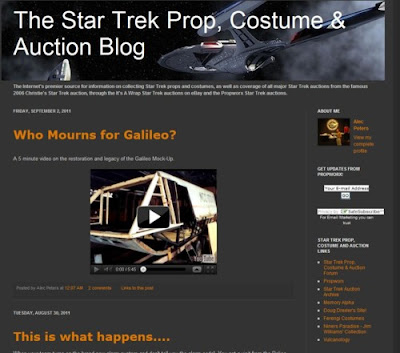 None of t hese blogs are on the Kindle, but they're all focused on Star Trek, Star Trek recently celebrated its 45th anniversary (on Sept 8, 2011) so I thought I'd share a few of these blogs today.

Welcome to Soul of Star Trek. Craig of Craig's List names it one of the top ten Star Trek blogs, Film Fresh names it as one of the top five. It's on the Guardian's top 10, Blogs.com's top 10, and at least one other top ten list. The Trek Movie site recommends it.

There are posts here about other science fiction, from 50s classic movies to Doctor Who and Firefly, H.G. Wells and Olaf Stapledon to Kim Stanley Robinson. Most wind up relating to what I feel is the soul of Star Trek in some way.

As for Trek itself, you might start with Star Trek origins posted for the 40th anniversary, or the Trekalog essays on the Star Trek feature films, or on one of the more popular TNG episodes, The Inner Light (with a comment by one of its writers.) I'm also partial to the posts on Encounter at Farpoint.

I've tried to make the labels useful, so I hope they can serve as good guides on your explorations. The Captain's Logs are generally newsier and more random. Thanks for stopping by, and I hope you enjoy your orbits.

Welcome to Star Trek Sci fi Blog. Star Trek is merged with real science and futuristic adventures which unites trekkie minds with hope for the future. Its not all going to end tomorrow with a big bang and a ka-boom.

Get warped with Star Trek within the galactic dimensions of Star Trek - Sci Fi Blog and you'll soon get wise to Star Trek worship.


_______________
Check out my kindle BOOKS!:
Whose Body, by Dorothy Sayers (the Annotated Edition)
The Coldest Equations (science fiction)
Volcano Seven: Treasure and Treasure Hunters
The Lady and the Tiger...Moth