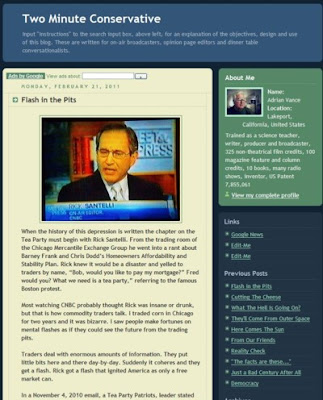 BLOG DESCRIPTION: Conservative ideas, thinking, science and humor for radio and TV hosts, opinion page editors and you. Arm yourself with powerful concepts, phrases and gags that disarm, dismember and disembowel those who would destroy America for all with their good intentions and goofy thinking. Liberals are people who have to think they are smarter because they know they are not. We can help them with clear visions of the way it ought to be.

MY REVIEW: Since I'm a conservative - mostly - I enjoyed this blog a lot, as the author sets the issues out clearly and in-depth. (As example the blog entry on California below. Part time teachers given full time pension benefits? Prison guards able to retire at age 50 with 6 figure pensions? (Well, one hopes its after they started work at 20 and put in 30 full years....)

Anyway, if you want to really know what's going on in the world today, check out this blog. The author posts daily.

Here's his bio from the blog:
Trained as a science teacher, writer, producer and broadcaster, 325 non-theatrical film credits, 100 magazine feature and column credits, 10 books, many radio shows, inventor, US Patent 7,855,061

The Wrath of Grapes
With apologies to John Steinbeck and Henry Fonda, who was a neighbor in my Bel Air days, the time has come when California looks like the famous movie running backwards and all the credit goes to our again Governor Moonbeam Brown.

God, fate or the fickle finger thereof, have put Mr. Brown smack-dab back at the scene of his crime of inventing the public employee unions that now have the state, county and municipalities indebted to them for $500 billion. Yes, half a trillion Dollars of unfunded pension liabilities to insure prison guards retire at age 50 with six figure pensions and all the way to the DMV. Part time teachers are given full pension credit for their service and the benefits just keep going. All on public employee union contracts, some really bizarre.

The city of Berkeley Council is voting on a $20,000 benefit for sex change surgery into the city paid-for health plan for its municipal employees. San Francisco has had this for 20 years. Berkeley is well off as it collects taxes from University of California employees including property taxes from the 18,000 well-paid UC employees. Most other California municipalities and counties are wrestling with bankruptcy. We are approaching an “event horizon” of fiscal black holes for 58 counties and hundreds of municipalities. Visalia has fallen and it is only a matter of time for the rest.

At a recent press conference Mr. Brown was asked about pension reform. He directed reporters to his website. When they examined it they could not find one word on the issue! Yes, “Governor Moonbeam is back!”

Governor Brown’s education funding plan ignores the California State Teachers Retirement System which has doubled its pension liability due to the downturn and mismanagement. Taxpayers are on the hook to make up the guaranteed difference negotiated by the unions but, the bankruptcy solution is on the table.

A more serious form of public employee rebellion is now seen in police departments withdrawing services. The Fremont, California police department no longer answers calls unless you have a name or badge number to give to the RoboCop automated answering officer.

In a state famous for viticulture we can say we are living the wrath of grapes.