Got A Ukelele (music, arts and entertainment) 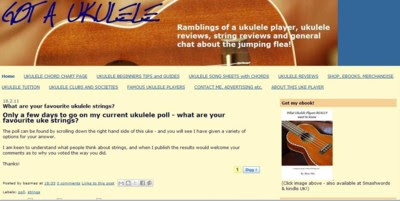 BLOG DESCRIPTION: A blog about the humble ukulele, aimed at the beginner or those thinking of purchasing a uke. I aim to provide beginners tips, reviews of instruments and accessories, plus the odd funny song along the way. The ukulele is the happy instrument, so read the blog, pick up your uke and smile!

This is a fun blog - you learn not only about how to play a uke, but also the history of the instrument and some of its greatest players.

For my next instalment of Ukulele Heroes, we look at the mighty Israel Kamakawiwo'ole, more commonly known as "IZ". A giant of a man, with the voice of an angel.

Israel was born in Honolulu, Hawaii in 1959 and raised in the community of Kaimuki. Being brought up in a traditional Hawaiian family, Israel started playing music with his brother at the age of 11, taking his influences from Hawaiian music stars.

His local musical career started when he founded the band "Makaha Sons Of Ni'ihau" in 1976, and recording their first album No Kristo, and a further string of four albums. The group quickly became the most popular traditional group in Hawaii, and the last recording Israel made with the group, 1991's Ho'oluana remains their biggest selling CD.

In 1990, his first solo album Ka'ano'i won a string of awards, but it was his 1993 album, Facing Future that brought him to worldwide acclaim with his rendition of Somewhere Over The Rainbow/What a Wonderful World, reaching 25 in the US Billboard chart and becoming the first ever album from Hawaii to go platinum.

Israel did however suffer in much of his life with a weight problem and was hospitalised on several occasions for weight related problems. He died aged 38 in 1997 of weight related respiratory problems. On the day of his funeral, the Hawaiian state flag flew at half mast, and his coffin lay in state at the Capital Building in Honolulu.

Since his death, his music, most commonly his rendition of Somewhere Over The Rainbow/What A Wonderful World has been promoted countless times, on TV, in adverts, and in the films Meet Joe Black and Finding Forrester. It entered the UK singles chart where it spent 10 weeks in the top 100, and recently went to number one in Germany.

IZ is now credited as being one of the major contributors to this decades resurgence in ukulele popularity and many Hawaiians consider him their standard bearer.