The Road (a multi-sport blog) 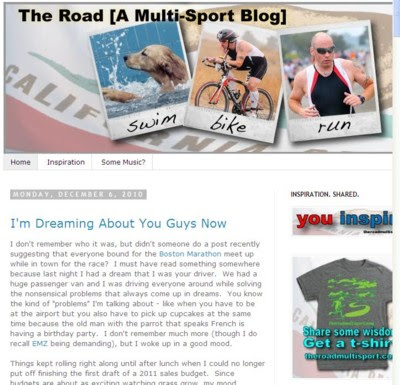 BLOG DESCRIPTION: 41 year old husband, father, friend to some, in the midst of unfortunate misunderstandings with others. In 2007 I started a journey to regain my fitness. In 2009 I started participating in triathlons. I have not looked back, not even once. The Road is my daily story and is just as much a part of my training and preparedness as a long bike ride or an interval workout.

MY REVIEW: This blog focuses not only on triathletes and their sports, but also in how to get fit, and parenting. Highly recommended!

Man, what a weekend. I had a great ride on Saturday and a great run today. And the frosting on the cake is that Oregon is in the BCS National Championship.

Saturday morning I headed out with OC Velo on a 60 mile ride from Huntington Beach, down to Lake Forest and back through Shady Canyon in Irvine and Newport Coast in Newport Beach. It was an epic ride, being that it was slightly warmer than last weekend and there was more climbing than usual. The coastal range around here isn't too high, but if you cross over it a few times you can get some good climbing in - we did about 2300 feet. I don't live for climbing, but I'm starting to enjoy it more than I used to. Plus after every uphill there is a downhill, so there is always some sort of payoff in the end.

I had to take Ian to a birthday party Saturday afternoon so I texted all my Oregon Ducks loving friends and told them I was in a sports news lockdown until I had a chance to watch the game on the DVR. I didn't get to it until about 9 last night, but I was still (thankfully) in the dark about it. The game was a pretty good, actually great at times, and the end result was that Oregon won. For that I am happy.

This morning I went for a 7.6 mile run in the Bolsa Chica Wetlands. I've fallen into this pattern on Sundays where I'll rotate a 7-8 mile trail run one week with a 10 + road run on the other. Unlike two weeks ago, when I ran this route for Black Knight's Virtual 10K, the winds where calm and the trails where dry. I even stumbled upon a quarter mile spur path I had never found before, so I checked that out as well. No snakes, plenty of rabbits. Just the way I like it.

I then took Ian to an arcade called "Nickel Nickel" for a few hours so Mary could Christmas Shop. This place is a total dump filled with games that are all at least 10 years old. But everything is five cents and we made $7 last an hour and a half. It's also conveniently located next to Surf City Cyclery. I've been meaning to buy a new saddle wedge bag since the one I have is terrible, so I picked up a Fi'zi:k bag that has a special clip system that integrates with their saddles. Way better than straps.

Finally, I don't want to become known as the boy who cried wolf, but there are some things cooking with Endurance Athlete Project that might be cool and that I might be able to talk about later in the week or early next. This means I might be a little scarce on the blog posting side for the week, but I'm going to do my best on the blog reading side.

I hope everyone had a good weekend.