The Friends of Carlota - Spanish for Spanish as a Second Language 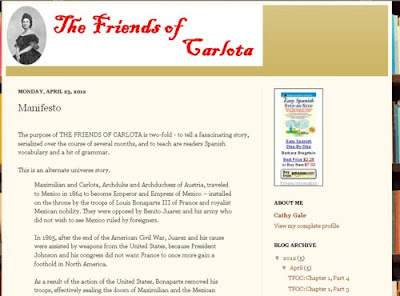 
The purpose of this blog is two-fold - to tell an exciting story in the alternative history genre, and to teach my readers Spanish at the same time.

The story begins in English, as Carlota has a premonition in 1859 that her husband, Maximilan, will become Emperor of Mexico in 1864, and three years later be deposed and executed, while she fruitlessly tries to save him by visiting the royal houses of Europe.

When her premonition starts to come true, Carlota decides to take matters into her own hands. She will have no friends in Europe, she knows, so she must find them in the Confederate States of America, a country that she knows will be on the brink of defeat during the Civil War when her husband the Emperor will be in most need of rescue.

Carlota sends emissaries to the United States to recruit her friends - and of course since they'll be living and fighting in Mexico they will need to learn Spanish. Similarly, Carlota begins to learn Spanish as well, so that she will be better able to serve her subjects as Empress of Mexico.

MY REVIEW:
How many people try to learn Spanish but falter and forget about it, because their textbooks teach them dull and boring dialogs between people whom you wouldn't want to know in real life? In The Friends of Carlota, the reader is learning Spanish along with Carlota, and along with her minions in the United States of America who are working toward her long-range plan to save her husband.

If you are fascinated by the story of Maximilian and Carlota, or interested in alternate universe Civil War fiction, and want to learn Spanish, I think you'll enjoy this blog.