The Thing on the Fourble Board (arts and entertainment, OTR, audio books reviews) 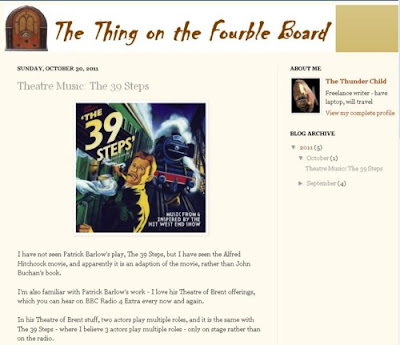 AMAZON SUBSCRIPTION LINK: The Thing on the Fourble Board

BLOG DESCRIPTION: eviews of audio books in the mystery and science fiction genres, and in nonfiction - historical, biographical, scientific. I review the quality of the narrator(s), as well as the books.

I also review and synopsize old time radio programs - The Shadow, The Saint, The Jack Benny Show, Dragnet, X Minus One.

If you're a fan of the theatre of the mind, I think you'll enjoy this blog.

MY REVIEW: When I was young, I scoffed at the idea of listening to books on tape. I could (and can) read a book in three hours that it would take a narrator eight hours to get through.

But I hadn't fully thought my criticisms through. I now listen to audio books in the car, and make time for at least half an hour before lights out. With a good book and, just as importantly, a good narrator, audio books are fun to listen to.

My OTR experience is limited to The Shadow - and I'm still waiting for those synopsis to show up on the blog, but it's a relatively new blog, we've been promised the Shadow, so I'm sure it will come.

8 Audio CDs (about 8 hours listening time)
Interestingly, if you look on Amazon.com, The Art Thief, by Noah Charney, has only a 2-annd-a-half out of 5 star rating. A lot of people (at least, a lot of people who post their opinions on Amazon) don't seem to like it.

When listening to an audio book, it doesn't matter how good the book itself is, if the narrator is lousy. A few weeks ago I checked out a Clive Cussler audio book. Can't remember the title now, or the name of the narrator, but in any event I could only listen to a couple of minutes of it before I gave up on it - the narrator's reading was that bad. No attempt to change voices depending on what character was talking, no intonation changes at all, just a dull monotone.

Simon Vance has all this stuff down pat. The Art Thief is a bit wordy, but because Vance uses intonation and inflection all the time, it's not hard to listen to - it's easy to concentrate on it.

He also does various voices...although I did find it distracting that the voices his characters use when speaking, and the voices he used when that same character was just internalizing thought, were not the same.

Anyway...what you get with The Art Thief is a very complex story, and a lot of information on art. Some of the negative reviewers on Amazon got tired of all that art info (especially since several characters would have their own point of view on the same piece of art, so we'd hear the same information several times, just articulated differently. But, the way I looked at, hearing it repeated so many times allowed me to learn and remember what was being said - and since I'm interested in art as well as in a good mystery, I enjoyed it.

This book isn't a howdunit, more of a whodunit and eventually a whydunit. (In other words, we never learn exactly how all the artwork managed to be stolen, but we learn who did it and why they did it.)

If you're interested in art at all - how it affects the human psyche - and mystery, and like listening to a good narrator, I think you'll enjoy this book.

The characters may be stereotypical, and there isn't much character development, but they're interesting and sympathetic. ANd the author has a good sense of dialog and sense of humor.

So give it a listen. You may turn it off...but I guarantee it won't be in the first five minutes!

Noah Charney bio from Wikipedia:
Noah Charney (born November 27, 1979) is an American art historian and novelist. He is the author of The Art Thief, a mystery novel about a series of thefts from European museums and churches, and is the founder of the Association for Research into Crimes against Art.

Early life and education
Charney was born in New Haven, Connecticut in 1979. His parents, a psychiatrist and a professor of French Literature at Yale University were, in his words, “of the class of Americans who idealize Europe”, and as a youth he spent most of his summers in France.

He attended Choate Rosemary Hall, and received his undergraduate education at Colby College in Maine, where he majored in Art History and English Literature. During this period, he spent two years on exchange programs in Paris and London. Also while at Colby, he founded the Colby Film Society and wrote several plays, one of which won the Horizons New Young Playwrights Competition in Atlanta, Georgia, in 2002, the year of his graduation.

After graduating, he moved to London, where he studied at the Courtauld Institute and received a Masters for his work on seventeenth century sculpture in Rome. He subsequently attended Cambridge University, St. John's College, where he received a second Masters in History of Art writing on Bronzino's London Allegory, and began a PhD.

Current and Recent Projects
In 2006 Charney took a leave of absence from his studies at Cambridge to focus on other projects. Notable among these was writing. During the previous year he had written his first novel, The Art Thief which was published by Atria, a division of Simon and Schuster, New York,in September 2007. It has been published in 13 languages and was a best seller in Spain, Slovenia, Canada and The Netherlands. As he researched his novel he found that there was little scholarly material on the subject of art crime.

So he organized a conference on the subject in Cambridge in 2006, which attracted the heads of the art crime divisions of the FBI, Scotland Yard, and the Italian Carabinieri and was the subject of an article in the New York Times Magazine. In 2007 he joined with them, along with academics and others interested in the field, to form the Association for Research into Crimes against Art (ARCA). ARCA is a non-profit think tank based in Rome, dedicated to helping to prevent and prosecute art thefts, and to establishing the study of art crime as an academic subject.

Mr. Charney taught at Cambridge University's summer program and at Miami Dade College's program in Florence. In 2009 he taught a seminar on Art Crime at Yale University, New Haven. He is currently Adjunct Professor of Art History at the American University in Rome. He has also been a visiting scholar at the Institute of Criminology in Ljubljana, Slovenia .

He is the editor of Art and Crime, a collection of original essays by experts in the field, published by Praeger Press in the Spring of 2009[11]. In February 2010, geoPlaneta published a series of four museum guidebooks by Charney in Spanish and English. Called "Museum Time" (De Museos) the first books in the series provide guided tours to highlights of the collections of the leading museums of Madrid, Barcelona, Seville, and the Basque Country.

His non-fiction work on the many thefts of the Ghent Altarpiece, called Stealing the Mystic Lamb, was published in October 2010 by Public Affairs. He is currently working on a second novel and other non-fiction projects.

ARCA offered its first Masters level course in art crime and security in the summer of 2009—a 12 week course in the town of Amelia, Italy. The program has been quite successful and was featured in the New York Times. Mr. Charney also edits The Journal of Art Crime, a scholarly publication on Art Crime and Security that comes out twice a year.