Free (and semi-free) Literary Books for the Kindle (US & UK) 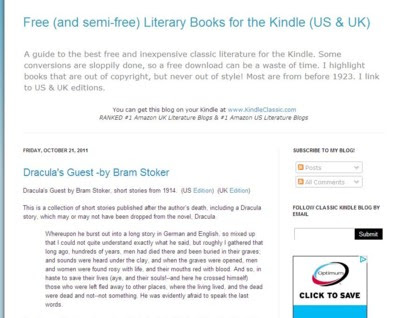 AMAZON SUBSCRIPTION LINK: Free (and semi-free) Literary Books for the Kindle (US & UK)

BLOG DESCRIPTION: Your guide to the best free and inexpensive classic e-books for the Kindle. Because some conversions are sloppily done, a free download can be a waste of time. These are books that are out of copyright, but never out of style! Many are from before 1923, but some were published between 1923 and 1963. I link to the US & UK versions.

MY REVIEW: There are a LOT of free books for the Kindle - most of them coming from before 1923, because that's when the copyright date went into effect. Anything published before 1923 is in the public domain, anything after that....may or may not be.

But everyone's getting into the act with these public domain books - there are often several versions available. And some of them have just been scanned in - which always results in a few errors which may or may not have been corrected before being uploaded to the Kindle.

So this blog is really helpful and well worth the 99 cents a month, to save time finding professionally produced books.

This is said to be a very funny and at the same time, very difficult novel. (Proust & Joyce are also in the funny, but difficult category – not to scare anyone off.)

The book has a rather famous beginning with the protagonist’s conception. And here it is:

I wish either my father or my mother, or indeed both of them, as they were in duty both equally bound to it, had minded what they were about when they begot me; had they duly consider'd how much depended upon what they were then doing;--that not only the production of a rational Being was concerned in it, but that possibly the happy formation and temperature of his body, perhaps his genius and the very cast of his mind;--and, for aught they knew to the contrary, even the fortunes of his whole house might take their turn from the humours and dispositions which were then uppermost;--Had they duly weighed and considered all this, and proceeded accordingly,--I am verily persuaded I should have made a quite different figure in the world, from that in which the reader is likely to see me.--Believe me, good folks, this is not so inconsiderable a thing as many of you may think it;--you have all, I dare say, heard of the animal spirits, as how they are transfused from father to son, &c. &c.--and a great deal to that purpose:--Well, you may take my word, that nine parts in ten of a man's sense or his nonsense, his successes and miscarriages in this world depend upon their motions and activity, and the different tracks and trains you put them into, so that when they are once set a-going, whether right or wrong, 'tis not a half- penny matter,--away they go cluttering like hey-go mad; and by treading the same steps over and over again, they presently make a road of it, as plain and as smooth as a garden-walk, which, when they are once used to, the Devil himself sometimes shall not be able to drive them off it.

Pray my Dear, quoth my mother, have you not forgot to wind up the clock?-- Good G..! cried my father, making an exclamation, but taking care to moderate his voice at the same time,--Did ever woman, since the creation of the world, interrupt a man with such a silly question?

Did you follow that? Did you find it funny? Then this book is for you! I have to say it is funny and I like the analogy about us being so hard to budge from the tracks laid out for us early in life. To me that is more thoughtful than funny . . . This is yet another candidate for the “first modern novel.”