Killzone (Mysteries and the authors who write them 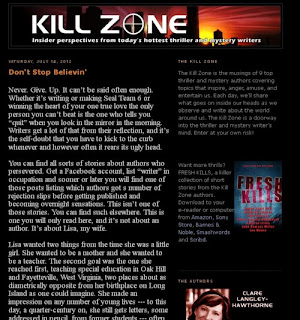 Never. Give. Up. It can’t be said often enough. Whether it’s writing or making Seal Team 6 or winning the heart of your one true love the only person you can’t beat is the one who tells you “quit” when you look in the mirror in the morning. Writers get a lot of that from their reflection, and it’s the self-doubt that you have to kick to the curb whenever and however often it rears its ugly head.
You can find all sorts of stories about authors who persevered. Get a Facebook account, list “writer” in occupation and sooner or later you will find one of those posts listing which authors got s number of rejection slips before getting published and becoming overnight sensations. This isn’t one of those stories. You can find such elsewhere. This is one you will only read here, and it’s not about an author. It’s about Lisa, my wife.
Lisa wanted two things from the time she was a little girl. She wanted to be a mother and she wanted to be a teacher. The second goal was the one she reached first, teaching special education in Oak Hill and Fayetteville, West Virginia, two places about as diametrically opposite from her birthplace on Long Island as one could imagine. She made an impression on any number of young lives --- to this day, a quarter-century on, she still gets letters, some addressed in pencil, from former students --- often scraping together money she didn’t really have to but shoes when she noticed a seven year old limping in the back of the room because they’d outgrown an older sibling’s Keds. At one point, however, she heard that biological clock ticking and without any likely prospects for a husband took matters in hand and began a course of artificial insemination. It was a one hundred fifty mile round trip to get-er-done, but it was what Lisa wanted, and she did it for two years, all the while teaching at a small school named Gatewood Elementary. Lisa used to stand and watch the children on the playground during recess duty, imagining that one day her child would be out there playing with them. At the end of two years, Lisa was given the solemn news that she would never get pregnant.  She kept teaching, took in a couple of foster children, and hoped that down the road a miracle would happen, all the while watching other parents’ children on the slides and swing sets.
Fast forward fifteen years or so. A combination of circumstances brought Lisa from West Virginia to Westerville, Ohio where, we met ironically enough in the hallway of a school. One thing led to another, as such things sometimes do, and we fell in love and became engaged. By that time I was aware of her dream; more importantly, I was aware of the type of person she was. I already had three children on the cusp of adulthood, but I knew what I knew, and I knew she wanted a child of her own. I told her that once we got married we could try to bring our own new life into the world. She repeated to me what the experts had told her. I waved the sage pronouncement away. “You just haven’t been with an Italian,” I said. “You’ll be pregnant within a year.” She replied, “You’re a cocky little b*****d, aren’t you?” We were both right.
Fast forward another fifteen years to last month. On our way to Charlotte and points south from Ohio we --- Lisa, myself, and Annalisa, our fourteen year old who the experts and specialists said would never happen --- stopped in West Virginia and did a tour of Lisa’s former schools and residences. As the sun began to set over the New River Gorge Bridge to the west we drove seventeen miles down a long holler on Gatewood Road, turning right into the parking lot of a small school. I drove around to the back while Lisa and our daughter Annalisa got out. Annalisa, unbidden, went over to the playground and got on a swing. And for a few moments, the world stopped as a dream came true and --- I swear --- the next song up on the    iPod shuffle was  “Don’t Stop Believin.’”