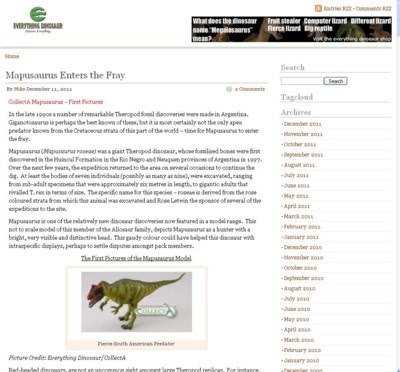 BLOG DESCRIPTION: Everything about dinosaurs!

MY REVIEW: I love this blog, and any fan of dinosaurs - from the toys to the movies to the real thing, will love it too. The main emphasis is on models of dinosaurs.

Dolichorhynchops – Monster from the Western Interior Seaway
With the mysterious decline in Ichthyosaur numbers towards the end of the Cretaceous, a new type of marine reptile evolved to take their place as a predator of fish, squid and octopi in the shallow sea that covered much of North America. This sea is known as the Western Interior Seaway and at its greatest extent is effectively split the United States into two. Fossils of Dolichorhynchops have been found at a number of locations, but the most famous fossils and the holotype material come from Kansas.

This short-necked Plesiosaur is represented by a new model (CollectA) which will be available next year. A spokesperson from Everything Dinosaur commmented that although there had been one or two delays at the factory, the “Dollies” as they are affectionately called are going to be shipped into the Everything Dinosaur warehouse probably in February.

It is an interesting pose, scientists remain unsure as to whether this stiff-limbed, Plesiosaur could haul itself onto land like modern turtles. Or did this animal, which could grow to over five metres long spend its entire life in the water?

The jaws seemed to be lined with a lot of sharp, pointed teeth, just what is needed when you live on a diet of slippery marine creatures. We are not sure wherther Dolichorhynchops genera had this many teeth (perhaps as many as forty in the jaws) – we will have to “bone up” on this Late Cretaceous vertebrate.