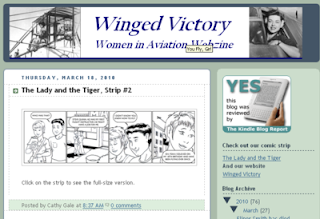 BLOG DESCRIPTION: Six percent of all the pilots in the world have been, and are, women. This blog shares news and views about women pilots.

MY REVIEW: On March 10, 2010, women celebrated 100 years of aviation. Just 5 years after the Wright brothers flew the first viable airplane, the Wright Flyer, in 1905, Frenchwoman Raymonde de Laroche earned her pilot's license. She was the first to do so, but within just a few years women from practically every country with an aviation presence had earned their wings - this despite the fact that it was hard to find instructors. The daredevils of the day thought that their heroism was lessened if a woman could fly as well as they could. After all, if a woman could do it, how hard could it be?

The early pioneers faded out once WWI began. A new crop supplanted them after the war, with Amelia Earhart, Nellie Snook, Elinor Smith, Marvel Crosson, Pancho Barnes, and many more taking to the skies. Everyone knows the name of Amelia Earhart, but there were dozens of women pilots who set more records than Earhart ever did. Earhart concentrated on distance, the others on speed, altitude, time, etc.

During WWII, over a thousand women became WASP - women airforce service pilots, ferrying planes across country where men being trained to fly them would then take over. In England, it was the ATA - both men and women flew planes there.

After WWII, many of the women wished to continue flying, but they were not permitted to do so. It was not until 1977 that laws were in place to prevent the discrimination of women (and minorities) in airlines, and in the military.

It was not until a couple of years ago that a woman, Major Nicole Malachowski, became a pilot for the Airforce demo team, the Thunderbirds. The English Red Arrows have a new team member, Lt. Kirsty Moore. Other traditionally male airforces around the world have recently added women pilots...

Keep in touch with all the news at Winged Victory, Women in Aviation.