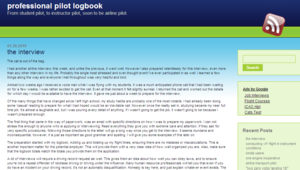 BLOG DESCRIPTION: Starting in the middle of 2005 and since chronicling the long journey from student pilot all the way to instructor pilot and perhaps some day soon, airline pilot.

MY REVIEW: This could have been a great blog, by Jared Dirkmaat. He kept it since May 2008, but he only published once a month. His last post on January 20 said that had gotten the job he had interviewed for, so he's probably been in intensive training for the last several weeks.